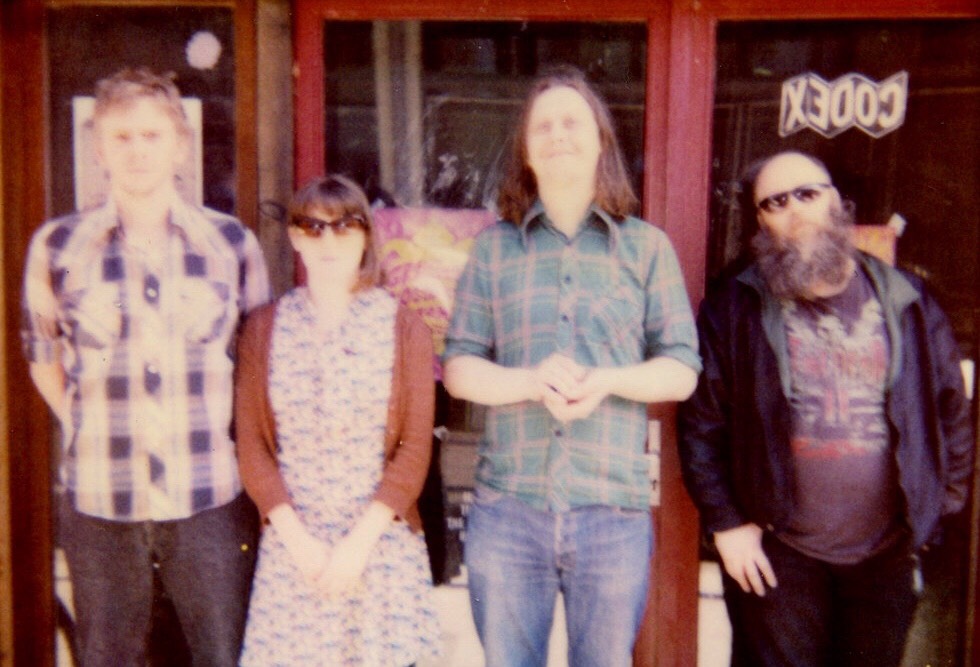 Kogumaza, instrumental outfit from Nottingham celebrating their 10th anniversary this year, have just announced the release of their third album, a double LP titled Fugues. Officially out on 19th March by Low Point, the record has been long overdue, as it comes four years after Kолокол (Russian for ‘bell’), a glorious ode to sound in the ever expanding spatio-temporal continuum. With the new opus, the band set off on another musical exploration, this time significantly larger and more ambitious in scope, in a search for a new perspective and an all-encompassing aural experience.

For those intrigued by the oriental-sounding name, Kogumaza is the Japanese word for the constellation Ursa Minor (Little Bear), clearly discernible on cloudless nights in the Northern Sky. The group, comprising Chris Summerlin [Wolves! (of Greece), Grey Hairs] and Neil Johnson [Wolves! (of Greece), I Am Spartacus, Savoy Grand] on guitars, Katharine Eira Brown (Rattle) on drums and Mark Spivey credited as a non-performing member conjuring the live sound, more than fulfil expectations created by their evocative and ear-catching moniker.

Inspired by the classical convention of fugue, a contrapuntal composition structured in three main sections (exposition, development and final entry) and built around a dominant motif subject to evolution through repetition, the band operate within a familiar territory. Repetition is Kogumaza’s crucial device, which they employ expertly with the aim of creating ethereal, hypnotic soundscapes of lasting presence. Here, circular phrasing brings about a mythical and universal quality, connoted in the telling track list. Consisting of four extended pieces, the album appears as an attempt to musically ponder the grand issue of the original cause by means of stripping the sound to the bare minimum of closely aligned yet distinct notes, which gradually come together in an epiphany, a tremendous unison of forces, only to disjoin a while later, each maintaining its unique form of existence. It is a continual process of engagement and retreat, with each encounter leading to a greater and more intense proximity. Guitars stomp ahead, inducing speed and building massive electric tension ready to discharge at any given moment. Concentration of magnetic energy gives rise to seemingly infinite loops, which ultimately collapse upon themselves on the way to a perfect tranquility, punctuated only by subtle twangs fading into the distance.

Circular formula employed in lieu of linear structure allows to reveal unexpected facets of the primary theme, as it undergoes a transformation, both within drawn-out passages comprising the album and the record as a musical whole. In the opener Io/Tohil, a profusion of chiming chords, gracefully climbing and falling in stark contrast with the hollow thudding of drums, fosters the spirit of eternal mystery and fascination with the unknown. In Bolan, jerky tones, gaining density and culminating in thumps of exhaustion, evoke the urgency and anxiety of an obsession spinning out of control, which takes its toll in the second half of the track, Exploding Head Syndrome, featuring thunderous riffs layered with resonant pounding of drums and saw-like guitar whir. Sub-Photic introduces an even lower register, generating a nuclear atmosphere suggestive of a budding thought/organism coming to the surface, with repetition playing a key role in enhancing the feel of pressure and resilience. The final passage, Chrysalism/Live in Time, rises towards a dramatic outburst of throbbing, fuzzy licks and potent strokes, calling to mind mountainous majesty or a splendour of massive tectonic plates about to clash. Just as in previous pieces, with seismic activity still detectable in the steady underground pulse, comes the coda hinting at a freshly restored harmony which, nonetheless, appears inexorably charged with an impulse for change, marked with gentle, yet tremulous notes.

Founded on the notion of time as a silent yet inescapable force, Fugues takes the idea of temporal extension to ultimate consequences. Following the classical compositional technique, it avails of its inherent features (circularity and repetition) in a manner reminiscent of nonlinear processes governing the natural world, as well as human perception thereof, including personal and collective memory. As a result of the dominant theme being evolved by means of subtle variations, the album produces a powerful hypnotic effect, conducive to reflection on the sense of self as a product of accumulative, yet unprogressive endeavour, and on all individual parts ultimately becoming one, as they transform and turn upon themselves in the ultimate quest to return to their origins. It is an album which takes its own time to properly sink in. It keeps growing on the inside, with each consecutive listen revealing more flavours to appreciate. Compelling in its quest of capturing the intangible essence of change, it provides a transformative experience in itself.

© Anna Bajor, 2019. Unauthorised use and/or duplication of this material without express and written permission from this site’s author and owner is strictly prohibited. Excerpts may be used, provided that full and clear credit is given to Anna Bajor with appropriate and specific direction to the original content.