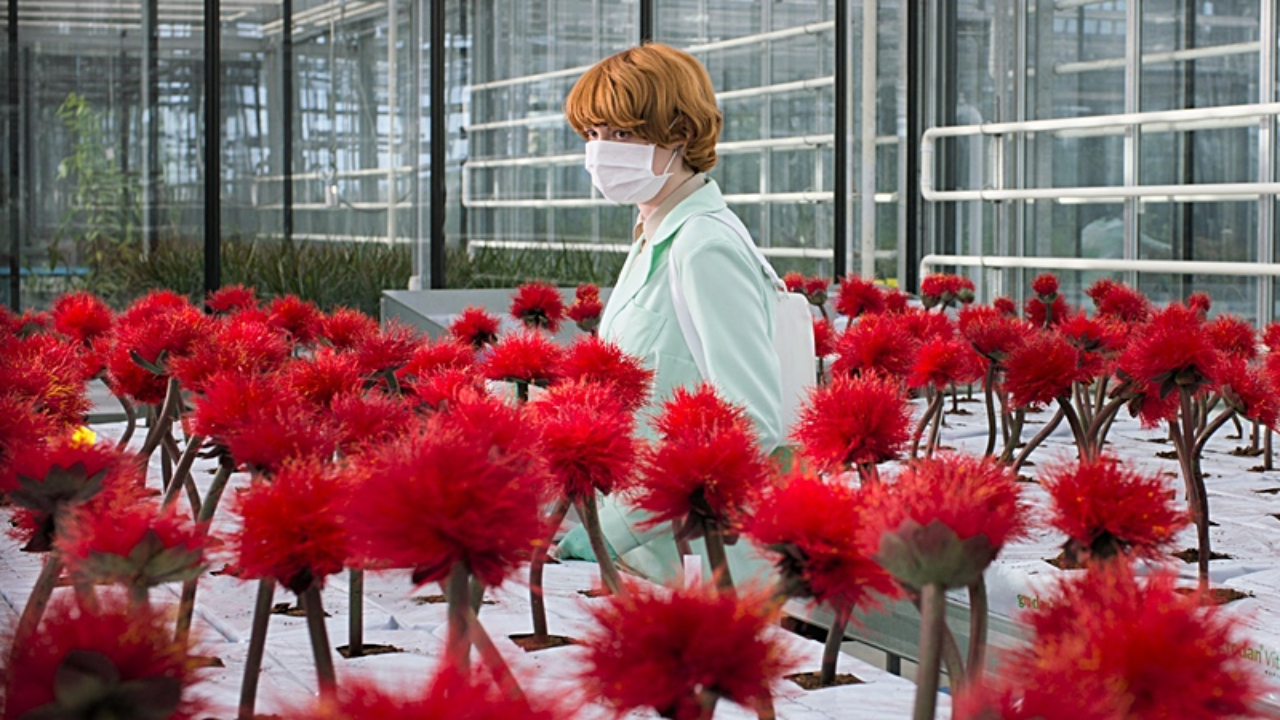 One of the best pictures in the history of sci-fi, Invasion of the Body Snatchers (dir. Don Siegel, 1956) has just gained a new rendition, this time authored by Austrian director Jessica Hausner, so far only known in the narrow circles of dedicated cinema-goers for her small-scale productions, such as Lovely Rita and Amour Fou. Rather than a full-blown remake of the cult classic, Little Joe, as it is titled, appears as a creative transposition of the original story into present times. The remarkably rich metaphor contained in Jack Finney’s 1954 novel, which served as a narrative canvas for Siegel’s groundbreaking work, has so far tempted numerous directors, coming up, in most part, with very respectable results. With over 40 years passed since the first extraordinary remake by Philip Kaufman (Invasion of the Body Snatchers, 1978), starring Donald Sutherland and Brooke Adams, and nearly 20 since the last worthy re-interpretive attempt (Body Snatchers, dir. Abel Ferrara, 1993), Little Joe is duly praised for its great topicality, as it excels at translating Finney’s dystopian vision into the 21st century of galloping consumerism and the corporate rat race.

For those not acquainted with the original storyline, it revolves around the idea that unidentified, most probably alien forces seek to dominate the world by replicating human bodies and transplanting into them peoples’ original personalities and memories. So conceived, the new humanoid creatures are devoid of the ability to authentically relate to and empathise with their fellow beings. Possibly the most difficult challenge facing a director attempting to convey this gruesome vision in the language of film is creating a convincingly ominous atmosphere permeating the universe in which humans are bound to lose their capacity to experience emotions. Hausner achieves that flawlessly with carefully selected means of expression.

By setting her narrative in a laboratory producing new strains of flowers, the director operates within a sterile microcosm whose aseptic nature, communicated with abundant use of white along with bright lights and sharp contrasts, corresponds with external visuals of vast parking lots, large expanses of carefully trimmed lawns and sleek buildings containing high-end offices populated by neatly clad workers. The inquisitive and omnipresent camera eye incessantly scans and explores everything in its reach, forebodingly hovering over the set and relentlessly peering into peoples’ expressionless faces in search of the truth behind their social facades. Those chilling visuals, the more spooky the more familiar they appear, find their ideal complement in the sinister soundtrack by the Japanese composer Teiji Ito, bringing to mind the mysterious spirit of Kurosawa’s masterpieces, such as Throne of Blood, Rashomon and Ran.

The film’s leading character, Alice (Emily Beecham), is a plant breeder responsible for creating a flower which, in exchange for caring efforts, provides people with the feeling of joy and happiness by releasing potent wafts of oxytocin. In honour of her teenage son, she names her creation Little Joe and smuggles one of the plants from the lab as a present for him before it has passed its final tests. Soon, the flower begins to intensely pollinate, possibly as a paradoxical response to the fact that, out of concern for its commercial viability, it was devised to be sterile. As a result of accidentally inhaling Little Joe’s pollen, people and animals change their behaviour. One of the lab workers’ dog, previously loving and playful, upon getting discovered among the plants becomes aggressive and ends up being put to sleep. In a similar pattern, Alice’s son Joe exhibits symptoms of indifference and aloofness, which also could be ascribed to the plant’s mysterious activity. Or could it? Maybe it’s just a teenage crisis combined with Joe’s mother’s self-doubt, as she subconsciously seeks to project her parental guilt onto the innocent flower. The same goes for the relationship of Bella with her four-legged friend. Perhaps not given sufficient attention and forced to spend his days at his master’s workplace, the dog expresses his frustration in the only natural way? How about the clinically depressed Bella finding her excessive needs for validation not being met by her pet? The truth is in the eye of the beholder, seems to be the message from Hausner as she intentionally blurs the lines between the alleged reality and its subjective interpretation produced by the human mind. By placing her characters in a cognitive loop, she confuses not only them, but also the viewer who becomes unsure as to the ultimate reading of the presented events.

By far the most ambiguous among the so far conceived filmic variations of Body Snatchers, Little Joe is a perspicacious commentary on modern society’s default lifestyle in which ready-made, pre-packaged emotions are in as high a demand as take-away coffee and food. A surrogate of love, the artificially conceived, oxytocin-producing flower symbolises the most pervasive ailment of our times: the overwhelming fear of deep engagement which expresses itself in avoidance of responsibility for the relationship with another living being or the effort necessary to keep it thriving. Born out of its creator’s emotional hunger, the plant sublimates Alice’s suppressed need for a romantic connection, which she refuses to acknowledge, hiding behind her busy schedule and professional passion. Having spent a substantial portion of her career searching for the miraculous solution of instant gratification, she can’t help but dismiss her colleague Chris’s (Ben Whishaw) clear advances, despite the obviously reciprocal attraction and her son’s forthright encouragement.

The dichotomy of nature and modern civilisation lies at the very core of Hausner’s filmic vision. While stimulating urgent reflection on the consequences of human interference with the eternal order of matters, Little Joe imparts just as pertinent observations on the dog-eat-dog corporate environment where projected results and financial goals hold infinitely more importance than the old-fashioned principles of ethical conduct. Stylistically and conceptually idiosyncratic, the movie is also cleverly amusing in its portrayal of the jarring contrast between the innate human needs and the self-conceited yet, in fact, painfully clumsy ways in which we, super-progressive humans, attempt to fill our emotional void without as much as giving a second thought to its true source. Faithful to the key idea of the original, Little Joe is worthy of all acclaim as a thought-provoking take on the cult narrative firmly rooted in the new millennium’s cultural realm.