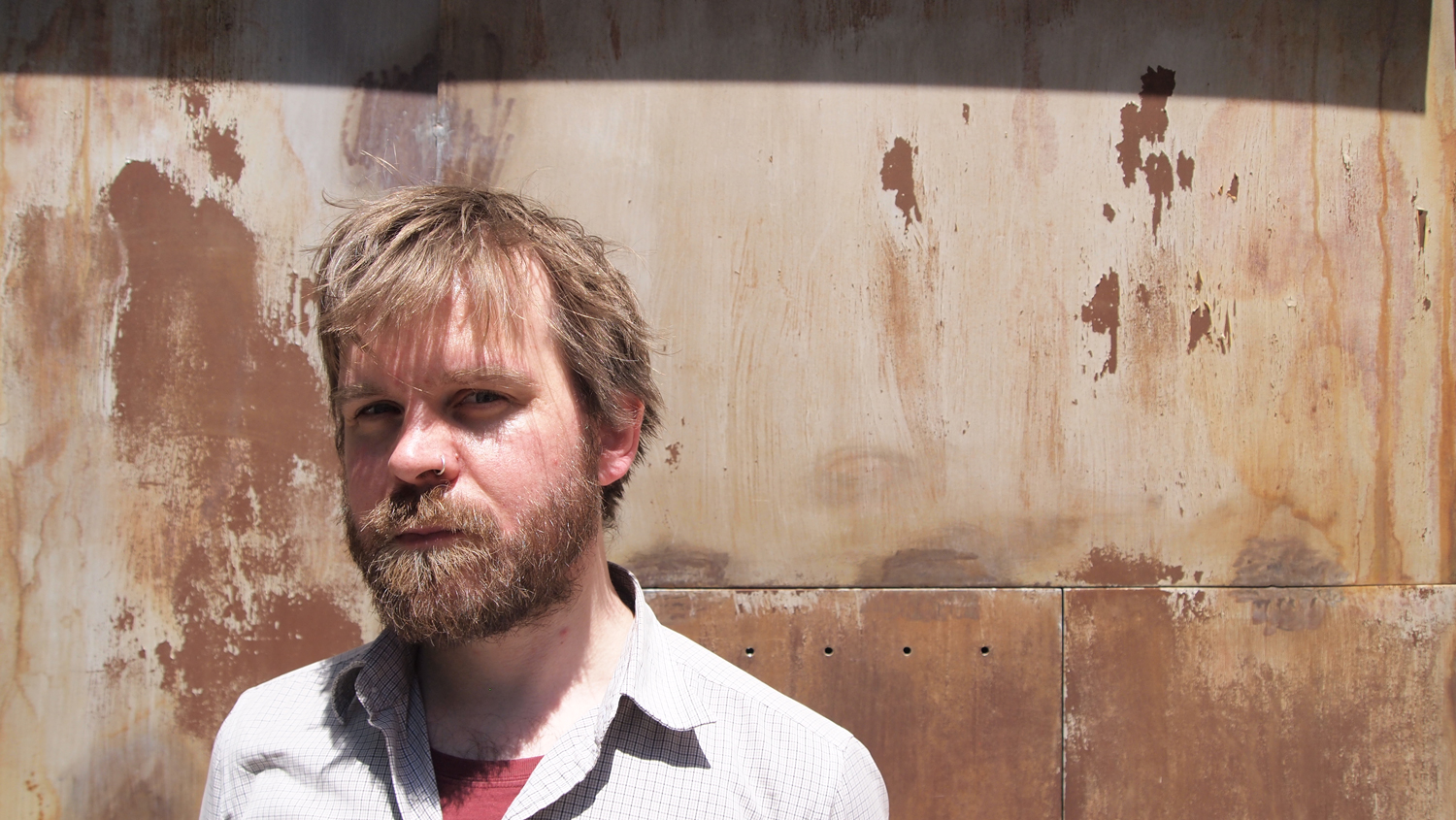 Sweet Williams’ new LP, Where Does The Time Come From, is due for release on 20th September via Gringo Records. Thomas House, who conceived and recorded the whole album by himself, talks to us about his incandescent urge to create, the past, the present and the future, films, gigs and a certain couple of slippery words.

Where Does The Time Come From is to be released as a Sweet Williams record, yet it was written and performed exclusively by you. Was it always meant to be a solo album or did it end up being one due to circumstances beyond your control?

At the point that I had an album’s worth of songs that I liked, everybody in the band was moving or changing job or having kids. We were lucky if we got to rehearse a couple of times a month. We couldn’t get the new songs worked up and I wanted to get the LP done and move on, so I started going into the studio on my own. Around the same time, that lineup dissolved anyway. No-one had time to do it any more. By the time I got a new group together I was already halfway through making the record.

Where do you see yourself now with Sweet Williams? When you look back in time, do you feel you have achieved what you had hoped for when you started the band? What are you most proud of?

I was a bit burned when my old band broke up in 2008. Because of the way that band worked out, at that point I felt like I couldn’t continue under that name without those specific people, and, I thought at the time, that meant I had to cut myself off from ten years’ worth of songs. It took me a while to work out what to do next, there were a couple of false starts, and I felt like I was supposed to deliberately try and write in a different way, as opposed to just letting things progress naturally the way I had always done. That’s a useful exercise I suppose, but it took a while to shake that notion off.

All of which is to say, I decided this time that the band would be me and whoever else was in it at the time. I did not want to ever have to start all over again, all over again. I want to keep writing songs and making records and playing gigs where I have a lot of songs to choose from. That’s something I hope I can keep doing and working towards for the rest of my life.

Did you have any specific aim in mind while working on this record? A new territory you wanted to explore?

I had a whole box of tapes full of riffs going back years and I just started trying to turn them into songs, partly so I wouldn’t have to carry around or look at this box of wasted time and space any more. For the first few days it felt like an exercise but there was a point where the decisions started making themselves. There wasn’t a specific aim behind any of it other than to write songs. I don’t think I’m ever happier than when I’m doing that.

Do you believe in the idea of originality in post-modern art? Film director Jim Jarmusch once famously said: Authenticity is invaluable; originality is non-existent. Would you agree?

I haven’t spent a lot of time thinking about creativity in those terms. But yeah, even the cave paintings weren’t done in a vacuum. Authenticity is a slippery word and I don’t want to get into it. If you’re thinking of making something, don’t set too much store in anything Jim Jarmusch or anyone else might say about what is and is not important. Just crack on with it. Unless it’s a weapon.

Did your recent move to Spain have any impact on the way you approach writing music?

Not as such, not yet, although I’ve had a lot more time and opportunity to write, so more is getting done.

What are your most vital influences? How have they been changing over time? Do you have any musical heroes you have always revered? An album you especially treasure and could never part with?

Joeyfat were the first band I got into that I’d stumbled on for myself, and I could go and see them live and talk to them and have conversations with Jason about writing music and how to go about it. A lot of that has stuck with me. I played in a group called 10 5 Neuton in my late teens with a couple of guys who are a bit older than me who showed me a lot of ropes. Ashley who drummed in Charlottefield had an enormous impact on me at a youngish age. He played me a lot of music from all over the map. He was always pointing out details and facets that you might otherwise have missed and I think that really encouraged my inquisitive ear. And he approached playing like life depended on every beat and note. Everything changed the first time we played with him. One absolutely had to bring one’s best game after that.

I own a lot of records – I had even more before we moved and I sold a load – and I used to hate the thought of being parted from them. Now that the vast majority of them have been in storage for nearly a year I’m quite enjoying living without all that weight. That said I’m looking forward to the day I can rifle through them again, whenever that is, with a turntable, in a room that doesn’t sound like a giant bucket. The Spanish aren’t big on carpet. One record though? Today I pick Throwing Muses – The Fat Skier.

How did the decision of joining Haress affect you as a vocalist? Has it been an enriching experience? Did it influence your vocals on this record?

The songs on Where Does The Time Come From were written before I started working with Haress, but the vocals on the record were recorded after we did the Haress LP. So maybe I had a bit more confidence. Singing with Haress has been, and continues to be, one of my favourite experiences. I’d love to describe in detail what I’ve gained from it but I fear I might break the spell for myself.

Who are the vocalists you most look up to? Any recent discoveries?

Nice question. Well, Kim Deal is a big hero. She’s written a lot of songs that just floor me and she has the best voice. There will only ever be one Mark Hollis. Lately I’m in love with Angel Olsen’s first record. There’s not a hair out of place on it. And her singing, it’s as good as any of the greats. It’s out of this world.

What’s next? What are your plans/ambitions for the next couple of years? Does your decision of releasing this album as a solo endeavour suggest that you’ve begun a new chapter?

I just want to stick at it. Keep writing, keep recording, keep playing. There are two lineups of the band now, one in Spain and one in the UK. Even so it’s difficult to arrange things around people’s busy lives, so if it comes to making records and playing alone, there’s always that. Yeah maybe it’s a new chapter. I have renewed my vows.

The album revolves around the concept of time, in both musical and existential terms. What is your perception of time? Do you think about it as a linear or circular phenomenon? To what extent does that notion influence the way you write music?

Wow. Well, I think of it as something I should fill as best I can, and waste as little of as possible. I don’t think I’m equipped to give you a more interesting answer. Sorry.

Do you think about music in visual terms? Are films influential to you as a musician?

I don’t think I do, and I don’t think they are. I’m partially sighted, maybe that has something to do with it. I can watch films and I can read and sometimes I can tell if something’s about to hit me, but it’s all a bit like hard work. I might associate certain music I’ve made with certain visual memories I have but that’s usually after the fact.

Which films and/or albums do you find especially effective/inspirational in representing time?

I like what Eternal Sunshine of the Spotless Mind and Inception had to say about the nature of time and memory, at the same time as finding them both terrifying. And sad.

Do you find the passage of time more tangible in the process of writing/recording or during a live performance?

Time doesn’t really occur to me in either of those situations, except when it’s running out. Live, I/we try and make sure that’s not an issue, by being prompt and planning properly. Time I find most tangible either at work (when I have a job) or on long journeys. Too bloody tangible.

Do you feel mature as an artist? If you could change something about your musical past, what would that be? Do you have any regrets?

I find myself having a similar response to the word “mature” as I did to the word “authentic”. I’ve made some excellent mistakes. No regrets that I can think of.

How do you conciliate your creative aspirations with demands of everyday life? Do you identify with Grey Hairs‘ frustrations?

I’ve been a little bit more fortunate in that regard of late, but I’ve certainly found myself utterly depleted by gainful employment in the past. It’s been a lot easier to balance up creativity with responsibility since I knocked some of my more self-destructive tendencies on the head. I hope that doesn’t mean I’m going to lose all my piss and vinegar. Grey Hairs are ripping, aren’t they? I’ve been playing their new one a lot.

Where do you see yourself musically in 20 years? What do you hope for?

I see myself still doing what I’m doing. I hope it’s still with good people that I love. I hope I’m still hearing things that give me goosebumps.

Listen to Facing East, the ninth track on Where Does The Time Come From, shared exclusively with Tracks & Frames in anticipation of the upcoming release.

The record is available for pre-order via Sweet Williams’ Bandcamp and Gringo Records‘ website.

Keep an eye out for the album’s review, due in the second week of September.